Robert Joyce was diagnosed with relapse-remitting multiple sclerosis (RRMS) at the age of 23, and has lived with a headache every single day since a car crash in 2014. Along with sarcoidosis and asthma, his conditions have contributed to his life following a very different path to the one he imagined as a young man fresh out of university. Robert has been kind enough to share his story with us, and how his outlook on life allows him to find appreciation and gratitude in all walks of daily life.

London. An amazing city that never sleeps. It was my first real job after getting my degree from NUIG (National University of Ireland, Galway). I had a Bachelor of Commerce in my pocket and I was starting to train as a Chartered Accountant. I started in September 1992, and in October I returned to Ireland to attend my graduation ceremony. Ireland is a wet country, and when my heals became numb on the day of my graduation I thought it was the cold. On returning to London it disappeared, so I thought nothing of it. However, a few days later the numbness started again, and this time it reached up my shins. Strange, I thought, and I went to see the local doctor. I described what was happening, and she referred me to see a neurologist.

Within three months – the day after my birthday – after getting a lumbar puncture, MRI scans and various brain and visual tests, I was sitting again in the office of my neurologist. He described the results of the tests and he said that in his opinion I had multiple sclerosis. It shouldn’t impact my life, he said, and that I should start taking Evening Primrose oil, and keep healthy. He also suggested I contact the MS Society. I went home, checked the encyclopaedia to see what MS was, phoned my parents to let them know, and headed to work. I didn’t know how to react, and so I just kept doing what I was doing. Working hard in my new job, and experiencing all the excitement of London

I went to a few MS Society meetings, and they frightened me. The people that I saw were old, frail, wheelchair-bound. They represented only a small part of the spectrum of MS, and I was really scared that this could become me. My father had done a lot of research back in Ireland and he found out about the Swank Diet (I still have the book) and I started to follow this. I have stayed on this diet for the best part of the last 25 years.

The course of my illness in the first year progressed to where my right leg didn’t work properly. I was numb up as far as my chest, sensation in my hands was poor, and fatigue became a problem. My job was fantastic, and I really enjoyed it. I was good at it, and the firm that I worked for when I told them my diagnosis, helped me in so many ways. Letting me work with clients close to where I lived, allowing me to get to work late, but this didn’t help. I had to make a decision if I should stay in London.

This was so difficult, and I felt as if the MS had won.

It had beaten me into submission, and I had to give up. I couldn’t continue and, as a result, returned to the West of Ireland. Back home.

I remember sitting on the bed in my bedroom with my mom, in floods of tears. I was broken. This cruel illness had taken away my independence, my career, even my girlfriend. Back to zero, maybe less than zero, starting over. My family was fantastic, and if it was not for my parents, brother and sister, and all my extended family I don’t know how I could have recovered. The support I received was amazing. With the help of my parents I took a few months to recover my strength, and then opened a small gift shop selling souvenirs to tourists. I called it ‘The Country Shop’. The shop did well and I recovered my ambition and strength. I helped with the local MS Society and helped others in the local community.

Over the next few years, I was involved in several different businesses, either as an owner or in management. I got married, had two kids, and my illness was stable. I was getting relapses every six months, and these became more frequent. My neurologist put me on beta-interferon to help slow the progression. This didn’t work too well, and the side effects were not great. Two days after each injection I had flu-like symptoms. The fatigue was getting worse. I was chewing modafinil, drinking constant mugs of tar-like coffee, and smoking, just to try and stay awake. How many times I drove home at night and had no recollection of the trip. I shudder to think about it now.

Out of the blue, my sister-in-law told us about Low Dose Naltrexone (LDN). She knew someone whose husband was using it, and he was having success with it treating his MS. I did some research and made a decision to try it. Nothing ventured, nothing gained, I reasoned. I stopped all my medication, detoxed for six weeks, and started this new drug. Within a few weeks, the fatigue was gone, my walking was normal, and I could feel things again. It was like a cure. Miraculous, I felt. This lasted for 10 years. 10 years that I felt that I didn’t have MS. I knew it was there because if I stopped with the LDN for even a week, my symptoms started to return. It was under control, but still there.

Another Change of Direction

Skip forward to July 18, 2014, and I was driving through a small village. I had stopped in traffic, and suddenly I was flung forward and then back again. I heard a loud crack in my neck, and dazed, realised that someone had crashed into me. I felt okay and, although the rear was badly damaged, the car was still drive-able. The other driver and I exchanged details, and I headed home. The next day I awoke with a bad headache. In my life, I was not a person that got headaches. The one time I did have a severe headache was when I had the lumbar puncture when I was diagnosed. This headache was like that. I started to get pains in my arms, hands, and my right leg felt heavy.

The MS symptoms that had disappeared have returned, and my walking has slowed, often requiring a stick. My ability to concentrate on something has become very restricted. One of my joys in life was solving puzzles, and understanding complex problems, and then finding new and creative solutions. It is a love of finding order in chaos. In the last three and a half years, I have been limited to concentrating on anything for no longer than 30 minutes. This includes conversation, reading, and learning. The skill that defined me up to this point was severely restricted.

In my working life, I have been a business owner, the Director General of a national sporting organisation, and a business consultant. Helping something grow, from nothing, made sure that I jumped out of bed in the morning. As a result of this constant pain in my head, my ability to do the work that once enthused me has gone. It has been blown away like a sandcastle in the wind. Once again, my life was a blank sheet. Creating a new life for myself, with these new, and old, restrictions have been a daily challenge. Finding a new purpose in life, redefining myself, for this new ‘normal’ has been difficult. I have tried many things, but I was not able to overcome the restrictions. I was trying to re-shape my old mould of life, into this new reality. That was a mistake.

Chronic illness totally changes the way you view life. Most people measure success with the possession of 'things', the size of their bank balance, and conspicuous consumption. Having the opportunity to re-assess my life, and start in a new direction, I had to take the time to find a new yardstick of success.

Now I have a new focus. Gratitude for everything that I have is the theme of my life.

Even the small things, like a beautiful flower, a pleasant smell, or a happy memory. By changing my mind set I am overwhelmed by all the joy that I can have in a day. It has been like an avalanche of positivity. This outlook is almost the complete opposite of how I defined my success before the accident.

There are days when I revert back to the ‘old’ Robert. It is easy for me to realise that this is happening because I start to get anxious and frustrated. How do I overcome these setbacks? Meditation and journaling have helped as they allow me to objectify these feelings, and then I can go through the process of bringing myself back to the new ‘normal’. Having this ability is fantastic, and it is by the continuous practice of re-centring myself that I have become quicker at achieving gratitude.

For the last four months, I have been writing a blog, documenting how I am living my life with chronic headaches, multiple sclerosis, sarcoidosis, and asthma. It has been exciting to be part of an online community that acknowledges the challenges of disability, but also is working to help each other overcome the inevitable setbacks, and helping to educate newly diagnosed people on what to expect. By contributing to it I hope to help the conversation about finding the positives in chronic illness and disability. It is a small contribution, but I hope helpful. Mainly for me, and hopefully others.

We would like to thank Robert for sharing his story with us.

If you found Robert’s story insightful, you may like to read other guest posts: 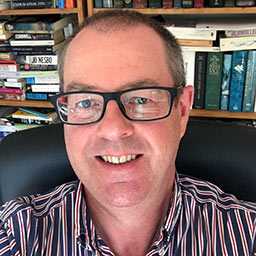 Robert was diagnosed with Multiple Sclerosis 25 years ago and has lived with chronic pain for nearly 4 years. He has learned many techniques and strategies that he writes about in his blog popup:yes. Living with gratitude is one of his main strategies for a life of chronic illness.

The app for living with multiple sclerosis

Multiple Sclerosis symptoms can be varied and unpredictable. Tracking them, as well as your well-being, helps give you and your doctor valuable information about your MS treatment.